Bardsley's Ltd was described as "Perfume and Toilet Specialists".   They were based at 431 Kent Street, Sydney.   Their only perfume products appears to have been Bardeau Eau De Cologne and Bardsley's Eau De Cologne although in late 1919 they also advertised a face powder.   The  cologne was sold in bottles priced from 1/- or in handsome cut glass decanters.  The earliest advertisment I have seen was in December 1917 and the cologne was advertised for sale until the early 1950s.   In 1919 it was suggested as something to use on your face-mask to ward off influenza (Spanish Flu?) and was refreshing when used on the hands and face of the patient.

By the 1950s the company no longer advertised

Known fragrances from this company 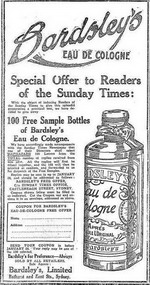