7777 Eau De Cologne & Lavender Water were products of The Gilvo Chemical Company of Melbourne.   The Company headquarters were at 360 Little Bourke Street right in the CBD of Melbourne.

The first advertising of 7777 Cologne appears to be around 1917, this would be for the eau de cologne in the long green bottle (one is in my collection) and it was made by the “Four Sevens Perfumery Company” but I don’t know if this was an earlier version of the Gilvo Chemical Company or a different company altogether - a bit more research needed. 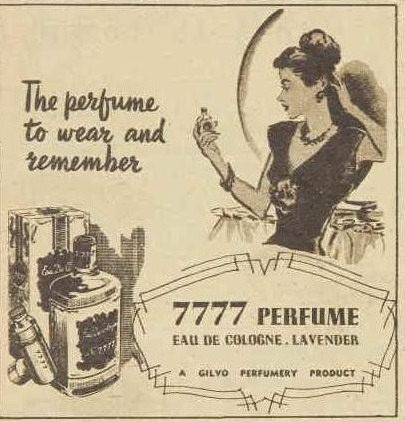 The three clear glass 7777 Eau De Cologne bottles in the collection date from the 1940s and these are definitely a product of the Gilvo Chemical Company. Two of the bottles themselves were made by the Australian Glass Manufacturers; the third is entirely covered in wicker so the manufacturer of the bottle itself cannot be ascertained.

Another Gilvo perfume was Stardust Bouquet which was sold under the Three Crowns brand and the company also produced a men’s lavender brilliantine under the Straight 8 name.

Gilvo perfumes were sold in major stores in capital cities throughout Australia as well as provincial cities and towns and were popular local perfumes/colognes when war time shortages hit hard.

In the 1950s Gilvo evolved into a screen printing business and the perfumery side of the business faded into history.