In 1925 The Laroona Perfumery Company became Simpsons Manufacturing Company which was listed as both a perfumer and manufacturing chemists.

The company stated that the greatest care was taken to produce a quality product – the firms motto being “Keep Up Quality”.   Their most popular lines were lavender talcum powder and lavender & musk.

In 1937 Mr John J Simpson, the production and manufacturing chemist, left for England where he planned to study the science of cosmetic and perfume manufacture.

In 1965 the company description changed to “packaging” and by 1968 the company was no longer listed in Sands & McDougall Directories.    The factory has now been demolished.

Unlike Laroona products Simpsons products did not generally appear to be of high quality especially those produced in the 40s and 50s.   The paper labels appearing on perfume bottles seem to be cheaply printed and on very basic bottles.   The powder boxes are of better quality and one particularly attractive box has a great art deco design on it.

By 1960 all advertising for Simpsons perfumery products had ceased.

Thanks to the Public Records Office of Victoria I have some images.   I think these are from the 1930s or 40s. 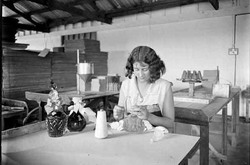 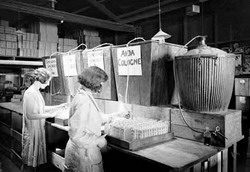 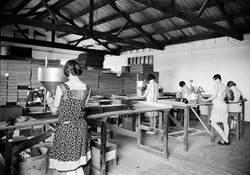