In February 1842 a young chemist Francis Hardey Faulding arrived in Sydney from Yorkshire, England.    As Sydney was suffering an economic downturn he decided instead to try his luck in Adelaide and in May of the same year travelled by sea to Adelaide.    He opened a pharmacy in Adelaide's main street in 1845, the business flourished and before long he had opened a manufacturing and wholesale arm of his business. He took a partner, Luther Scammell into the business in 1861.   On Fauldings death in 1868, Scammell became sole owner of the business and on his retirement his two sons L R & W J Scammell took over.   The brothers expanded  the business and it prospered for many years until 2001 when it was taken over by a larger company, itself bought out in 2007 by a US conglomerate.

The main innovation by F H Faulding & Co related to a development in the distilling of eucalyptus oil and the development of a test for determining the eucalyptol content of the oil.    The company made many products which became household names in Australia, most notably Solyptol Soap and disinfectant.   The company made a large number of products, from epsom salts to junket tablets but also essential oils for use in the perfumery industry. 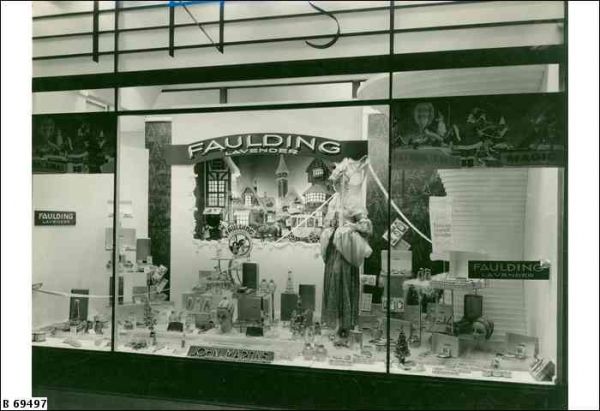 This image is from the State Library of South Australia (B69497) and shows a Fauldings Window Display in John Martin's Department Store, Rundle Street, Adelaide. c. 1950

It appears to be a Christmas display, note the model dressed in much the same style of gown as the Potter & Moore and Yardley Lavender ladies.   What a pity it's not in colour.